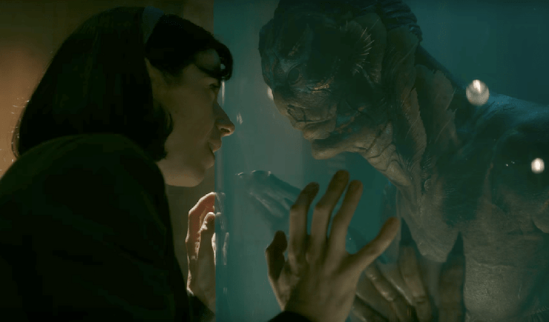 Image Description: A still from The Shape of Water. Sally Hawkin as Elisa, a dark haired woman shown in profile has her hands on the glass of a large tank. On the other side a humanoid but scaly creature with webbed hands gazes back at her.

I know I’m late in presenting an opinion on Guillermo Del Toro’s The Shape of Water but considering that the Oscar nominations were just released and Del Toro’s film has garnered a number of nominations including Best Actress for Sally Hawkins, I may be late but I’m certainly not too late.

The Shape of Water is basically a dark and flipped to take on a combination of Disney’s and Hans Christian Andersen’s original The Little Mermaid. Instead of a sea creature wanting to walk among humans, a human wants to be with a sea creature. Elisa, played by Hawkins is a woman who has no voice. She didn’t sell it to a sea witch but rather experienced an undefined violent injury to her vocal cords as an infant.

Unlike her Disney counterpart Ariel, Elisa doesn’t want to be separated from humanity around her but is instead ostracized because of her disability. In fact, at the end of the film, she seems prepared to give up her monstrous lover in order to stay with people. It is only because she is mortally wounded and no longer given a choice that she ends up in the water with her beloved creature.

Everything about the narrative shows how alone Elisa is. She lives alone in a poorly furnished apartment. Her neighbour and only nonwork-related friend largely ignores her if it doesn’t suit him. She is an orphan who experienced violence. She is so ignored at work that she can take her lunch breaks with her employer’s top-secret project and have it remain largely unnoticed even by her closest coworker.

Her only driving motivation is to be wanted. To be Included. She ultimately gets one and not the other which is what makes this film a nightmare.

Del Toro masterfully sets up a narrative where Elisa’s ostracization and treatment are clearly the fault of people around her. The film directly acknowledges that her oppression is socially constructed and then it lets the world get away with it.

Even at the end Elisa never intends to run away with her lover. She saves him from vivisection and lets him camp out in her bathroom but the relationship has an expiration date. The day he can be safely released back into the water.

Even as they stand on the edge of the canal and the creature asks her to go with him, she refuses. She still wants the human world. She still thinks her place is there. She again loses her right to choose though, after her boss, the film’s villain shoots her. She is either dying or dead when she is lifted and carried into the water by her lover. The lover, she intended to let go. He either heals or resurrects her in the final moments of the film enabling her to breathe underwater so that they can spend their lives together. Away from the world that rejected them both. This is supposed to be romantic.

Even if you ignore the rejection of Elisa’s agency when she said that she intended to stay on land. The film acknowledges that the barriers she experienced were socially constructed and then concluded with “It’s better to just leave”. Leave and live what is implied to be a solitary existence where she has only her lover for company.

It is interesting how closely this conclusion mirrors my own youthful fantasies about romantic relationships (except that I kept my imaginary lovers human). I often felt like any relationship I might find would be a once in a lifetime opportunity and that we would inevitably end up living a secluded life together because of the discrimination that I faced. Except in the real world, that kind of relationship is a recipe for abuse and I’m glad I grew out of it.

The Shape of Water could so easily be a different kind of horror film about the dangers of social denial of the sexuality of disabled people and how that makes them easy targets for abusers. Instead, it does exactly that story but ignores the inherent dangers of becoming infatuated with the first man who pays you any attention because the world has spent decades telling you that you are undesirable. It takes what should be a cautionary tale and turns it into a bittersweet romance. In so doing it absolves the bigoted world that rejected Elisa and ends on the message that if the world doesn’t work for you, even if it’s clearly the result of discrimination that the best option is to leave.

At least in both versions of The Little Mermaid, the mermaid was clearly trying to move from one society to another. Elisa gives that up for a completely uncertain future. As Elsa Sjunneson-Henry points out in the title of her own review of the film “I want to be where the people are”.

Disabled people don’t need more pseudo-romantic movies that romanticize our otherness, that connect us so clearly to monsters. That say if society doesn’t accept you that you might as well embrace the monster that they see in you and join literal monsters in a life away from humanity.

If you liked this post and want to support my continued writing please consider becoming a patron on patreon.

If you can’t commit to a monthly contribution consider buying me a metaphorical coffee (or two or more). Contributions help me keep this blog going and support my ongoing efforts to obtain a PhD.

If you want to support my work but are unable to do so financially, please share this post on your various social media accounts.