Image Description: Doctor Who logo written in blue with a DW in the centre of the two words forming the shape of the TARDIS

This most recent season of Doctor Who has had me thinking about just how bad and limited the representation of disability has been on the show. The show which is often very socially conscious has created a universe past, present and future where disability is generally nonexistent or tokenized.

This is of course not just a problem with Doctor Who but is a wider issue of disability representation in the media more generally. The thing that makes Doctor Who stand out (other than the recent storyline of the Doctor going blind) for criticism is that on the rare occassions that there are disabled characters, they are either done very well or very badly. Most recently both at the same time.

The season 9 episode Before the Flood included Cass, a deaf character whose deafness was not a major plotpoint. The character was also played by a deaf actor. This kind of representation is revolutionary. A disabled character who just happens to be disabled.

This trend continued in the 10th season with the character of Erica in The Pyramid at the End of the World. She just happened to have dawrfism. It played no part in the plot. This positivity was however, overshadowed by the Doctor’s blindness–part of a three episode arc–which was dramatically cured at the end of the episode.

It really threw into sharp relief how tokenistic these disabled characters–and it is relevant to mention that not all people who are deaf or who have dwarfism identify as disabled–despite how good they are. They are still really noticeable because of how rarely they appear and yet they appear without question. In order for disability to be truly unnoteworthy is to make it normal and a part of the world of the show but these characters appear and are gone. Disability isn’t even visible in the background as extras. So as normal as the characters are in their stories, they remain noteworthy exceptions outside of them.

This is particularly clear when you look at what happens to the narrative of disability when it happens to the Doctor. Suddenly, the writers fall back on many harmful stereotypes and storylines.

The Doctor’s blindness which begins in Oxygen and is conveniently cured in The Pyramid at the End of The World is purely a plot device that is used to create tension and then conveniently discarded to again further the plot. The fact that this plotline intersected with actual disability representation is offensive.

A blind doctor was an ineffective one. His blindness had to be cured because he could no longer really be the Doctor. Having that moment of cure in an episode also starring a terrifically competent disabled character, really undercut the power of that representation. Particularly because the thing that foiled him was absurd. He needed to enter a code but instead of the more realistic keypad–which he could have navigated without sight–he was inexplicably presented with a combination lock.

The moment was so utterly unrealistic (yes I know it’s sci-fi) and clearly contrived to create the need to quickly cure the Doctor because if he doesn’t get through that door he’ll die.

So the audience is presented with the paradox of the real representation provided by erica’s character and the played out disability as plot device provided by the Doctor all in a single episode.

I want the future–both in the real world and in the universe of Doctor Who–to be accessible but it isn’t. We generally only see disabled characters in if not the present day then in earth type settings. The future in Doctor Who is very much not accessible.

The TARDIS itself is horribly inaccessible which limits who the Doctor can have as a companion and how well he would function if the Doctor became disabled in a way that couldn’t be magicked away for the convenience of the plot. The TARDIS doesn’t have automatic doors, though the amazing Mike Mort designed a shirt with just such an adaptation (buy it here) 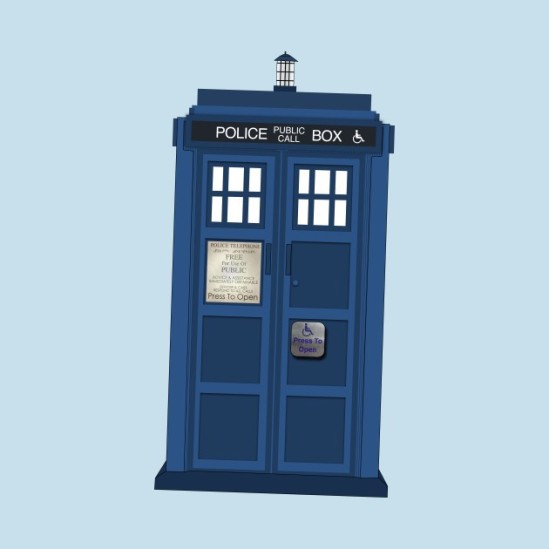 Image Description: A Drawing of the TARDIS, a blue phone booth with Police Public Call Box on the top and a sign on the left door that reads “Police Telephone Free for the Public. The right side door has an automatic door opener with the International Symbol of Access and the words “press to open”

the world of Doctor Who, very much like the real world is inaccessible but in some ways it’s worse because it shows that the world doesn’t get better and that the future is just as if not more inaccessible than the present unless it’s briefly convenient for the plot or to accommodate a single character who will never be seen again.

If you liked this post and want to support my continued writing please consider buying me a metaphorical coffee (or two or more). Donations help me keep this blog going and support my ongoing efforts to obtain a PhD.

6 responses to “The TARDIS is Inaccessible: Disability in Doctor Who”