“It’s just one story” or so people keep telling me when I protest the lack of diversity in both autism narratives and characters in the media. The thing is that’s exactly the problem.

Film and television have basically been writing fan fiction about the same autistic character in different scenarios for decades.

This character is invariably white

Image Description: Promotional poster for the upcoming ABC show The Good Doctor. The title appears in blue over a grainy black and white image of half of series star Freddie Highmore’s face (he is a young white man with dark hair). In contrast to the black and white, his eyes are a vibrant blue. 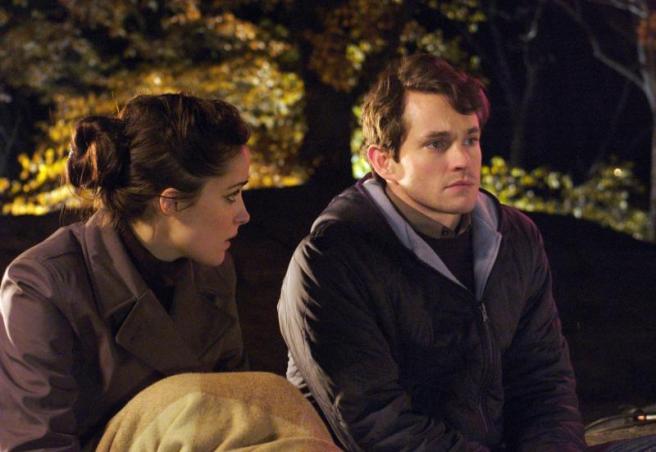 Image description: a still from the film Adam where actress Rose Burne (a thin white woman with brown hair pulled up in a messy bun) sits on a bench facing and speaking to Hugh Dancy (a white man with wavy brown hair), the autistic character who is sitting faced forward rather than toward the person speaking to him

There is generally very little deviation. Occasionally, overt savantism is replaced with a special skill or focus as in the case of the film Adam. These minor changes are however not meaningful.Savantism and special or focused skills are treated as almost interchangeable personality quirks.

Think I’m exaggerating? I made a chart

It’s not an exhaustive list but it is an informative one. Seriously, if you come across an autistic character in film or television plug them into this chart and see how many boxes get ticked. Another thing that all of the characters have in common. They were all played by neurotypical actors.

And yet, when I wrote yesterday about the continuation of this single white male autistic narrative in the new show The Good Doctor, I was met with this

Image description: a screenshot of a tweet that reads “People with autism take many forms, faces, and stories. this is just one. Showing that capability isn’t exclusive is so important!” (link to original tweet)

I have a couple of problems with this sentiment. First, it is not just one story. It is pretty much the only story we are told. For this to be an accurate defence, there would need to be evidence that there were other narratives available. Where are they? Second, is it really an accurate story. Another common defence of tired repeated disability narratives is “well some people are really like that“. I am however sceptical about the existence of a man with ridiculous medical skills and genius level proficiency in several areas. I’ll wait while you find me a real life stand in for this imagined magical autistic white man.

It is true that Rain Man character Raymond Babbit (though not the story) was loosely based on actual savant Kim Peake (who was not himself autistic) but even then it was more a mishmash of diagnostic traits than a portrayal of the man.

These characters have a fictionalized kind of autism that focus on rare traits like savantism and then sprinkle in more common traits like sensitivity to noise and difficulty with eye contact so that people see enough recognizable autistic traits to get away with an authenticity defence to tell basically the same man’s story over and over. They just put him in different scenarios. The biggest change in autistic characters overall is that they’ve become cuter (if they’re children) or fuckable (if they’re men). Though actually having sex is rare for these characters. They’ve mostly just gotten hotter. This switch to a more appealing autistic male is generally to use their savantism or special skill as a consolation prize. Sure, he’s autistic but it makes him a fabulous doctor and he’ll save that kid’s life.

This leaves little room for autistic stories where savantism or special skills don’t counteract the perceived unpleasantness of the autism for a predominantly neurotypical audience.

Despite this, there is still the idea that stories about marginalized populations should be “authentic” which is where the “This is just one story” line gets pulled out like a weapon to defend these all too similar stories.

During the promotion phase prior to the release of The Accountant, actor, Anna Kendrick

admits she initially had concerns about whether the film would be able to represent autism in an accurate and nuanced way.

“A friend of mine has an autistic child, and I was so worried about telling her I was going to do a movie with this subject matter and potentially getting it wrong,” she said. “She was like, ‘I’m going to tell you something that somebody told me when my son was diagnosed: When you’ve met one autistic child, you’ve met one autistic child. To have an expectation that he should act this way or you should act that way — don’t even worry about that. Everyone is different.’”

It is both unfortunate that this line is being used by people in the entertainment industry as a promotion tactic. It is also unfortunate that a parent with an autistic child helped her do it.

Seriously, the next time someone defends a fictional autistic narrative through the diversity of autism. It had better actually be a story I haven’t seen before.

And can we just please put a moratorium on putting white men in those stories because the real diversity of autism goes well beyond diagnostic traits.

If you liked this post and want to support my continued writing please consider buying me a metaphorical coffee (or two or more). Donations help me keep this blog going and support my ongoing efforts to obtain a PhD.

I am a disability and mad studies scholar who is currently working on an autoethnographic PhD looking at the ways in which mad and disabled women are still hidden from public space in various ways. it is tentatively titled "We Still Hide Mad Women in the Attic" View all posts by crippledscholar