More than a week after the 2016 US election many people are still in shock at the result. People are still trying to piece together how Donald trump won and at the same time voice their horror at his election. This is entirely understandable considering the bigotry that was the backbone of Trump’s campaign which included suggesting that undocumented Mexican immigrants were rapists and that the US should build a wall on the Mexican border & the suggestion that the US should implement a total shutdown of Muslim immigration into the country.

Criticisms of Trump and his use of this sort of rhetoric absolutely should be criticized and protested. Particularly because these things could be acted upon and be used to harm the people being targeted.

image description: A screenshot of a tweet by Damien Owens including an image of Donald Trump physically mocking disabled reporter Serge Kovaleski with the text “As long as I live, I will never understand how this alone wasn’t the end of it” (link to original tweet)

This tweet has been retweeted over 100 000 times and I originally can across it when the screenshot was shared on Facebook. This incident is considered by many to be Trump’s worst moment of the campaign.

Things like this make me feel sick and it’s not even the fact that I am repeatedly forced to see that image of Trump (horrific as it is). It infuriates me because it comes not from an understanding of what a Trump presidency will actually mean for disabled people in the United States but from pure paternalism.

Trump mocking Kovaleski is undeniably ableist. It is awful & worthy of criticism and commentary but it is far from the worst thing Trump said or did during his campaign and quite frankly the obsession with putting it forward as the quintessential example of how horrible Trump is, is deeply hypocritical.

First, let’s remember why Trump was mocking Kovaleski in the first place. He was angry that Kovaleski pushed back against Trump’s exaggerated interpretation of an article that Kovaleski had written about reports that Muslims were seen celebrating on 9/11.

The mockery of Kovaleski completely overshadowed the fact that Trump was in fact trying to fan the flames of Islamophobia at the time. He was doing that because he had already called for a registry of Muslims. First question, why wasn’t declaring a registry for an entire religious group not big enough of a horror to be the last straw? Second question, why is the mocking of an individual (even if that mockery is grounded in bigotry) worse than the Islamophobia Trump was defending and the actual suggestion of registering Muslims,  an action that if taken would hurt millions?

Mocking Kovaleski was bad but it wasn’t a suggestion of action against disabled people, even Trump knew enough to deny that he was mocking Kovaleski’s disability. He knew better than to double down on that. An awareness that he did not extend to the other groups that he targeted and included suggestions on how he might actually hurt them like mass deportations and building a wall.

That is not to say that Trump’s policies are good for disabled people, they’re not. He’s threatening the Affordable Care Act (ACA) and disabled people are very worried about what a Trump presidency will mean for them. However, simply holding up Trump’s mockery of Serge Kovaleski doesn’t help them. It doesn’t acknowledge how gutting the Affordable Care Act will hurt disabled people. It does not show Trump’s track record of dealing with disability issues (like that his properties have been sued at least 8 times for ADA violations).

It does not come with an active call of solidarity for disabled people with demands for greater access and ACA protection or plans on how to help disabled people when Trump implements harmful laws.

This kind of focus also ignores the double standard of lambasting Trump for his ableism but ignoring the ableism used against the Trump campaign.

Apparently, Trump mocking Serge Kovaleski is beyond the pale but the widespread and concerted efforts to label Trump with a hypothetical mental illness were righteous and in no way totally stigmatizing of people with psychiatric disabilities.

Right Wing pundit Ann Coulter defended Trump by claiming he wasn’t mocking Kovaleski’s specific disability but was rather “he was just doing an impression of a ‘standard retard'”. As much as I hate to agree with Coulter in any way, particularly when she’s doing her level best to normalize slurs against people with intellectual disabilities, she may well be right. It is all to common to attempt to discredit someone by suggesting they are like someone with an intellectual disability. Trump was even the target of such associations.

During the campaign I came across images like this, 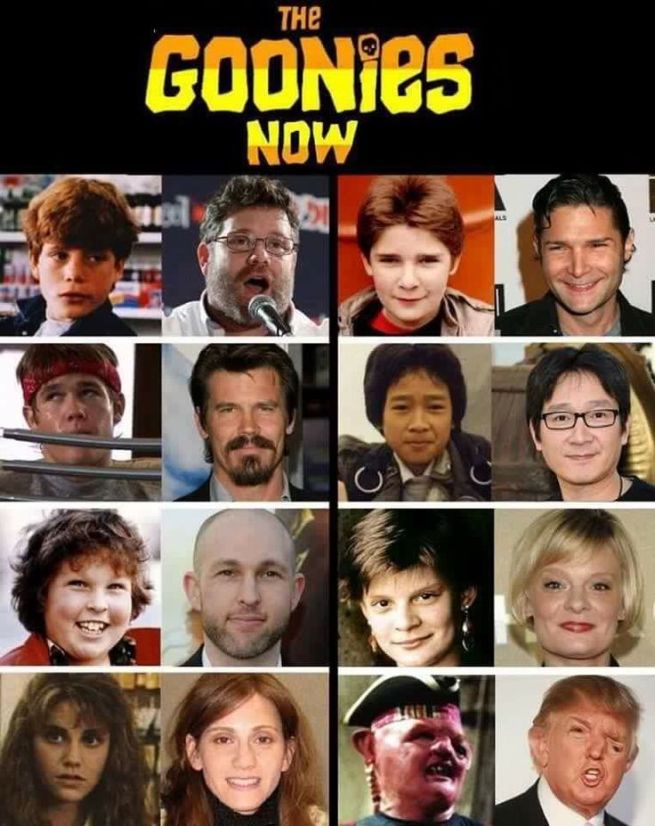 Image description: A side by side image labeled “The Goonies Now” it shows then and now photos of the cast of the 1985 film The Goonies until the final comparison which shows a picture of the character Sloth who has an intellectual disability and facial disfigurement, it is shown next to a photoshopped image of Trump who has been changed to feature the same disfigurement.

Associating people with disability, particularly intellectual disability to discredit them is very common but the hypocrisy of focusing on the Kovaleski incident goes beyond that. It completely ignores the social reality of being disabled and that those realities were created or maintained by both political parties and extend beyond the borders of the United States.

Consider the fact that as soon as it became clear that Trump was going to win; a post that I had written back in April on disability and immigration to Canada started getting a lot of traffic. It actually maintained the top viewed item spot on my blog for over a week.  If you don’t have time to read it it boils down to: if you’re disabled you can’t immigrate to Canada unless you marry a Canadian.

The British government is currently under fire from the UN for violating the rights of disabled people with austerity measures. The government has more or less dismissed these concerns.

Socially on an international level it is entirely acceptable to treat disabled people like second class citizens. None of this reality is addressed by focusing on that one time Trump mocked a single disabled person. Lambasting just the mockery suggests that the world is supposed to be above treating disabled people badly but the lived experience of disabled people does not bear this out.

By simply suggesting the world should be above mocking disabled people without contextualizing it with the harms of ableist actions and policies, people are in fact covering up the fact that those things are widespread realities.

If the concern was a genuine concern for disabled people then the question wouldn’t be “why didn’t Trump’s mocking of a disabled person stop his campaign in its tracks?” but rather “Why didn’t ads like this one for Hillary Clinton which affirms the humanity of disabled people and the importance of inclusion guarantee her the presidency?”

The reality is that people are all to permissive of policies and laws that discriminate against disabled people regardless of political affiliation and fixing those problems or even acknowledging their scope is harder than calling Trump out for a single incidence of ableism.

I am a disability and mad studies scholar who is currently working on an autoethnographic PhD looking at the ways in which mad and disabled women are still hidden from public space in various ways. it is tentatively titled "We Still Hide Mad Women in the Attic" View all posts by crippledscholar