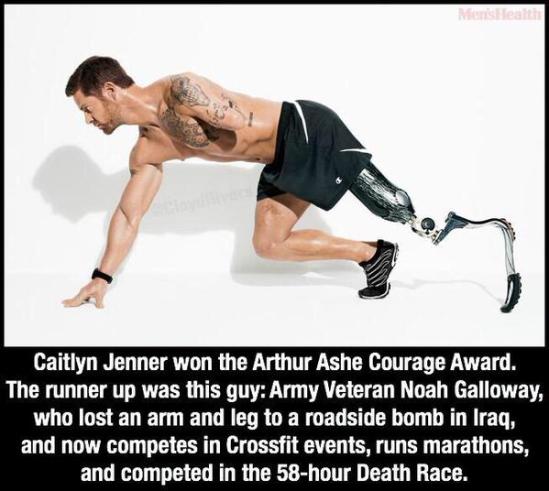 The above image shows a picture of Army Veteran, Noah Galloway crouching as if to start a footrace. He is a double amputee (left arm and leg). He wears a running blade prosthetic. The picture is captioned

Caitlyn Jenner won the Arthur Ashe Courage Award. The runner up was this guy: Army Veteran Noah Galloway, who lost an arm and leg to a roadside bomb in Iraq,and now competes in crossfit events, runs marathons, and competed in the 58-hour Death Race.

This image has been retweeted on Twitter over 50,000 times. It is a horribly transphobic image. It is also a lie. The idea that Jenner won over Galloway is pure conjecture. The is no evidence that Galloway or anyone else was even considered for the award.

So effectively someone was angry that Caitlyn Jenner who has a long and successful athletic career is getting recognized for both her contribution to athletics and her more recent contributions to social change in transgender representation. This angry person then needed to find a more suitable (read respectable) winner, one that people would have difficulty or even be shamed for criticizing. They picked Noah Galloway.

This obviously resonated with people as it was shared so widely. In fact a Canadian politician Rick Dykstra is facing criticism over sharing it. He also really wishes that people would just get over it already.

The issue isn’t just that the tweet was transphobic. It also created an argument that it is appropriate to compare oppressions and suggest that some marginalized people are more deserving of positive recognition. This is awful and dangerous.

Marginalized groups should not have to compete against each other or wait their turn in the fight for social justice and human rights. Even in the case for the group that comes out on top it is bad. The position is precarious and lasts only as long as the voice of privilege and power want to redirect attention away from something that makes them even more uncomfortable. They may find themselves in the lower position of competing oppressions when the situation and stakes are different.

Disabled people are not more worthy or deserving of recognition than trans people and there experiences except in instances where the two identities intersect aren’t really comparable. Any suggestion to the contrary is likely trying the justify the continued marginalization of one group by using the other as a red herring. In the end they don’t really care about either.

I am a cis disabled woman and I entirely support the recognition of Caitlyn Jenner’s contribution to sports and society. Noah Galloway’s experiences and athletic triumphs are indeed notable and important in showing how life doesn’t end after disability but even if I had to compare the contributions of the two I would still support Jenner. Society has been supporting and applauding disabled athletes for a while now. The same can not be said for transgender athletes. In terms of social impact celebrating Jenner has more potential for creating a cultural shift towards trans acceptance and inclusion. This is precisely because so many people are uncomfortable with the idea. Giving people the comfortable option isn’t really supporting change.

This in no way detracts from the accomplishments of Noah Galloway because celebrating Caitlyn Jenner isn’t the indictment of Galloway that the above image suggests that it is.