So April is upon us and along with it Autism Bewareness Month (I stand by that word choice). Tomorrow is World Autism Awareness Day and I am already feeling suffocated by all of the faux awareness.

The danger of those shoutouts is not only in their inefficacy and often patronizing messaging, it is also in that they benefit problematic organizations.

Yesterday, I was scrolling through my Facebook feed when I noticed that a friend had added a border to their profile picture. The following image is my own photo with the border as illustration (don’t worry it never made it onto my profile).

Image description: A woman with short blond hair, blue eyes and dark blue lipstick, looks directly at the camera. On the bottom is s white border with the Autism Speaks logo (a blue puzzle piece over the words Autism Speaks) and followed by the words “different not less”

First, let’s deal with the messaging. On its face, it’s a positive message but it also doesn’t really tell you anything about me or my experiences as an autistic person. It’s also so basic that it merely pays lip service to my humanity rather than actually affirming it. It exists in the same vein as the empty “special needs” memes that promote “acceptance” through pity. 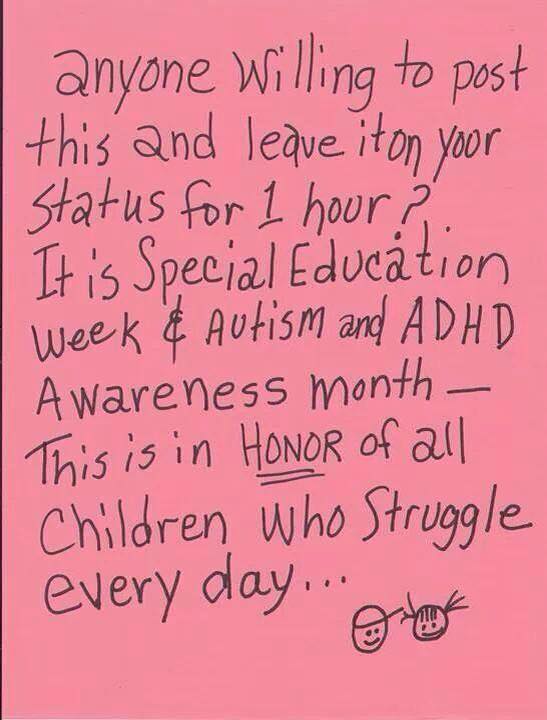 Image description: Black text on a pink background the text reads “anyone willing to post this and leave it on their status for 1 hour? It is Special Education Week & Autism and ADHD Awareness month–This is in honor of all children who struggle everyday”

Images like this often position themselves as dares, the suggestion is do you dare? are you brave enough? The message that those who don’t are morally suspect. Then the images don’t share any actual information but reaffirm the preconceived notion that to be disabled is to suffer.

Not only is this not true awareness it is active misinformation that spreads pity.

Returning to the Autism Speaks Facebook border. While is isn’t as aggressive in its approach to getting people to use it, the end game is the same. You can feel good about the fact that you’ve done something. You’ve helped raise awareness. Admittedly an awareness that consists largely of an acknowledgement that autistic people exist and a general sentiment that it’s probably best to be nice to autistic people.

It doesn’t tell you why you need to be reminded of these facts. It doesn’t tell you about the real risks of violence and bullying that autistic people face. It doesn’t tear down stereotypes about autism. Which means that people are likely going to continue to comfortably believe the misinformation they may have internalized.

This kind of solidarity is predominantly a performance. It may come with good intentions but it ultimately does little or nothing to actually help autistic people. It does make people who add that border to their profile picture feel warm & fuzzy though.

One thing that the widespread adoption of performance solidarity like that border is that it gives a lot of publicity to the organization that created it and that’s a problem.

While there have been changes in the organization and it no longer promotes a cure narrative and is no longer overtly anti-vaccination. It still widely benefits from it’s history peddling those dangerous narratives.

consider how the White House is going to “Light it Up Blue” (a practice created by Autism Speaks) tomorrow for the first time in years after the Obama administration halted the practice, in large part because of feedback from the autistic community. Donald Trump is friends with Bob Wright, one of the founders of Autism Speaks and the source of many of the dangerous narratives that the organization no longer officially supports. Trump is also sceptical of vaccines.

So regardless of their official position change. Autism Speaks is still largely associated with those narratives and they crop up in very visible ways. Autism Speaks is almost certainly going to financially benefit from this connection.

So, I would ask you not to change your profile picture to include that border this April. I would ask that you not support Autism Speaks.

These are things that can actually create a more nuanced understanding of autism and a positive kind of awareness. An awareness that leads to acceptance and action on the right of autistic people.

How to support my work
If you liked this post and want to support my continued writing please consider becoming a patron on patreon.

If you can’t commit to a monthly contribution consider buying me a metaphorical coffee (or two or more). Contributions help me keep this blog going and support my ongoing efforts to obtain a PhD.

If you want to support my work but are unable to do so financially, please share this post on your various social media accounts.